Happy New Year to One and All – and so good to kick it off on a New Moon (well nearly).

These blogs are normally a reflection on the moonth just gone. This one is a little different as it’s a look back at the year just gone and a sneak preview of the year ahead – or more specifically, at the 13 moonths just gone and the 13 Moon orbits ahead.

So the Soulwaves Insertions project was a complete success from a timing perspective, at the very least, more listeners would have been nice mind you!

The book was published on the 1st New Moon and then followed by the creation and publication of twelve ambient tracks, meditations and lectures … and a little more. I am really proud of it as a complete art work spanning book, music and meditation.

Big thanks to Sister Moon for keeping me on time and in focus. 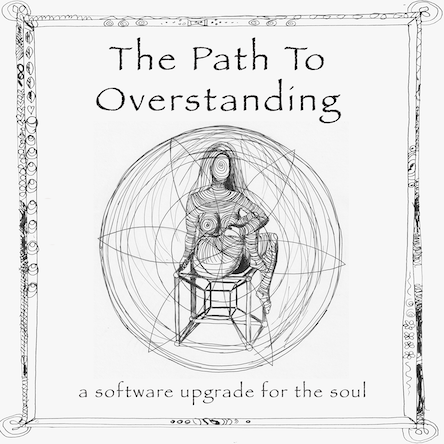 So I now draw a line under that project as a new one opens up this moonth. As mentioned in previous blogs, it’s all about the Tarot of Overstanding. It’s an evolution and expansion of the Tarot as it’s currently known and understood.

The initial project I started co-creating with the very talented artist Siri Opli in Summer 2021 was a deck of cards, with some big differences. When one project completes, it gives space and time to really reflect on what is coming up next.

The deck of cards will hopefully get delivered sometime over the coming year. Over the holidays, however, I realised that what the project is really about is to deliver a set of tools for personal growth and spiritual awakening.

So I will be making many years of esoteric study in to an exoteric ‘box of delights’. I will be including materials that I have been sitting on for many years and not written about in any of my other 18 books.

You can think of it either as a ‘software upgrade for the soul’ or even as a ‘death-less reincarnation’. Just as for other books, there will be awakening meditations and ambient music so you can experience, not just read about, higher states of consciousness. More than this, towards the end of this year, I will be introducing a newly updated tool for advancement called The Cube of Overstanding.

This Cube is the Master Recipe of the Flavour of Thoughts – a Master Spell, if you like, from which you will be able to have permanent access to the higher dimensions. In fact, what happens is that you bring the higher dimensions down to the Earth Plane. Your soul truly incarnates in your physical body.

So rather than just delivering a book and set of cards as a fait accompli sometime in 2022, the programme will be streamed over a number of months to give you time to integrate the learnings. The exact timings will depend on those taking the journey.

How to Get Some Overstanding

I’ll be using Soundwise as the platform to launch it exclusive to subscribers. This means you can ask questions and share enlightenments as you go along, with both me and fellow travellers.

There will be five new Soundcasts which can be accessed by annual or monthly subscription:

The first Soundcast, Flavours of Thought, is like a starter, or preprandial, before a sumptuous main course, which you can savour over the whole of this year and beyond. For the Flavours, I will be streaming it in four modules, timed to the moon of course, starting on the 1st quarter on the 9th January. From February onwards, I will begin streaming the rest of the materials …

Your annual investment for these five Soundcasts will be $55.55 if purchased annually in advance, or $5.55 per month (which equates to $66.6 annually). You gotta love the numbers!

Note that they will all be included in my current Tom’s Tomes subscription which will be increasing to $99.99 annually in February. So if you subscribe soon, you can save $20 each year.