The Idea of Momentum

In classical mechanics, momentum describes the product of mass times velocity. What this means is in practice is can be imagined like this.

If a golf ball is hit at 100 miles an hour and hits a steam train travelling the other way at the same speed, the golf ball which weighs somewhat less will rebound at very close to 200 miles an hour in the opposite direction. NASA makes use of this principle to slingshot space probes around planets in order to massively increase their speed. This is known as a gravitational slingshot and it uses angular momentum as its guiding principle.

So the lighter something is and the slower it moves, the lower the momentum. So how would we approach giving something which we consider having no weight a huge momentum? How do we give ideas momentum?

First we must recognise that even thoughts have some mass. They constitute the elementary fabric of the Universe from which all matter is formed. Unlike matter, thought travels faster than light which kind of makes the classical equations fall apart but, nonetheless, it means thought has both mass and velocity of a kind.

In fact, thoughts which permeate the whole of space-time only become ideas when they hit a special type of matter known as our brains. Our brains are quantum transducers that slow thoughts from the collective consciousness down and bring them into the physical plane. A transducer incidentally converts one type of energy into another – like a loudspeaker that converts electrical signals into sound waves or a microphone that works the other way around.

Once the raw thought-form is transmuted into an idea, the conversion is not complete. If we do nothing with an idea, it will float back into the mind-pool to be picked up by another brain. Anyone who has had a bright idea and done nothing with it only to see someone else coming out with their invention can tell you this.

The process of grounding ideas can be neatly explained by this model. 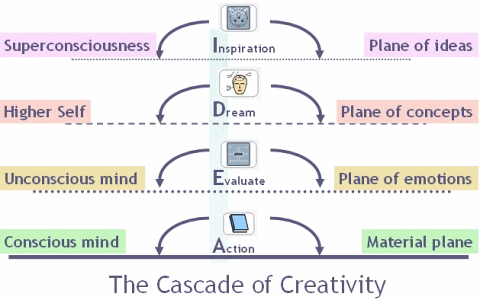 The thought comes to us from the Superconsciousness from the Plane of Ideas. We then dream what we can do with it interacting with our Higher Self on the Plane of Concepts – quite often this is in dream time or meditation. If we get excited by these dreams, we bring them down via our unconscious mind into the Plane of Emotions. Our gut tells us it’s a good bet and our heart falls in love with it. In this way, we pin our emotions on the idea to back it. We feel it in our water.

Finally, we bring it into our full conscious awareness the Material Plane by making a prototype. If it’s a physical product, this might be a space model. For software, you might make a wireframe walkthrough. For a service, you might seek a case study with a guinea pig client.

Incidentally, when all this happens at once, we call it a Light Bulb Moment.

Irrespective of your route what has happened is the nearly weightless idea has been given mass. For the next trick, for it to have momentum behind it, it has to be given velocity. 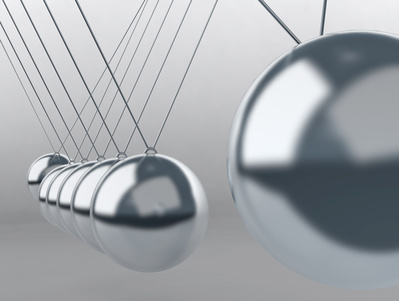 If you observe Newton’s cradle, the first ball transfers its momentum to the last ball through the others. In the same way, all we have to do with our seed idea is to pass it to one person and ask them to pass it on to a friend or colleague. To do this with maximum efficiency, it has to be in their interest.

In the old energy, motivation might either be financial or ego-based. For example, you might give your contact a referral or affiliate fee or their status could be enhanced if they are seen as the bringer of news.

In the new energy, conservation of momentum is karmically balanced when the communicator knows everything they pass on will be reciprocated. This doesn’t have to be a one to one reciprocation. The ‘payback’ can and will come from another source.

When you pass on such a recommendation, there is a simple way to bend the so-called laws of physics. Add some unconditional love on with your referral and the momentum increases.

Recently, rocket scientists have found space probes are travelling a little faster than expected after planetary slingshots. Just possibly, they are getting a similar nudge to their momentum from the planet they are passing. It’s as good an explanation as any.