How to experience Moments of Light 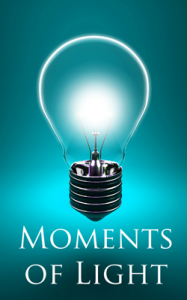 When you experience a moment of light, it is quite simply magical.

If you happened to have an Magnetic Resonance Imaging [MRI] scanner handy at the time, and you stuck your head in it, you would see every neuron in your brain lighting up as it connects with it’s neighbours. Over 10 billion neurons would light up in harmony shouting “Eureka” at you.

Moments of light like this are more commonly referred to nowadays as light bulb moments. As Archimedes, Newton and Saint Paul could testify though, we experienced them well before the light bulb was invented.

They are a special mode of consciousness where, in less than a second, you see the whole picture. Apparently, Newton intuited the complete theory of gravity in that split second and it took him the rest of his life to tabulate them. They seem like they occur in less than a second because, for that moment, you have jumped outside space and inside time.

It is assumed they are random yet it is possible to enter a special type of meditative state, with your eyes open, where you can experience them on demand. The first step in achieving this state of being is to understand what blocks such moments of light.

Imagine if someone cuts in front of you, into that safe gap you left, on the motorway. You feel affronted. Perhaps, if your life was endangered, you may utter an expletive or even flash your lights at the offender. At that exact moment, certainly what won’t be happening is that you will be having a moment of light. Just by a subtle flip in your thinking though, you could have had an idea for a new novel called Road Rage or a safety device for a car which told the driver the gap was too small to pull into. The issue is that your thoughts are controlling you, not the other way around.

If you are in any kind of heightened negative emotional state, be it anger, sadness, hurt, fear or guilt, light bulb moments are stopped dead in their tracks. Your emotional see-saw gets thrown off balance. 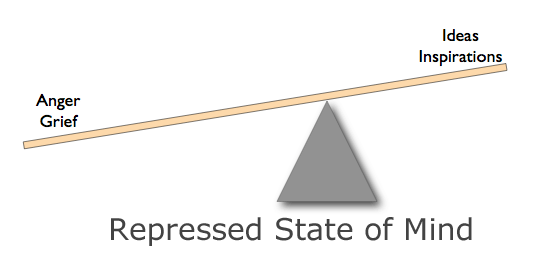 Even if you had a bright idea, there is just no brain space for it to surface. Any inspiration you might be feeling gets outweighed by heavy emotion. You will have to wait for the extreme emotion to abate.

This is why it’s best not to make a decision or send that email when you are angry. Take a few deep breaths, even wait for 24 hours and you will end up with a better outcome. You may even have a bright idea of how to respond to achieve a much more satisfactory outcome.

For most of the time, and most people, hopefully our brains and minds are running on a more even keel. Instead of rage, anger or grief, perhaps you are just beset with the daily worries of life. From this position, you can begin to enjoy flashes of inspiration and good ideas can get an airing. However, if you are in anyway fearful of the outcome of expressing or executing an idea, you will remain in stasis. You won’t go forward and you won’t go back. Everything will just be fine and dandy and the boat won’t get rocked.

In order to progress from this state of mind, we have to make a leap of faith. We need to see the fears and worries that beset us each day in a different light. Our unconscious mind is the source of such emotions. These fears and worries don’t exist in the real world; they are just inside our heads.

The Fool in the Tarot on the surface can be seen as a reckless figure without a care in the world. In some packs, he is only a couple of steps from walking over the edge of a precipice. He is however enlightened, with his face aligned to the Sun, the source of light. He only appears to be a fool to us as we haven’t reached his state of grace. His emotions are under control. Like the snapping dog at his feet, he knows fears are only there to tell him to pay attention to something. He doesn’t concern himself with them when not appropriate.

If the Fool could speak, his favourite phrase would probably be, “There’s no point worrying about something you don’t have control of.”

So it is not a case of ignoring fears when they arise but paying attention to them only when necessary. If you are worried about something, it is just your unconscious (or gut) mind telling you there’s something you need to address. Once you’ve taken action, move on.

When you make this shift, you become free to work with the light and have unlimited light bulb moments on demand. The see-saw shifts in your favour and you notice something new.

First, to appreciate how to maximize your light bulb moments, we need to look at the dictionary definition of the word ‘moment’. We see that, as well as meaning a moment in time, it is also a force applied at a distance from a central pivot. If you use the same force but with a lever twice as long, you double it’s effectiveness. This of course is nothing new, the architects of Stonehenge and the Great Pyramid knew this.

When we use it in this see-saw analogy, the length of the lever is proportional to the level of focus in our consciousness and the level of our intent. If we dilute our consciousness by tackling too many things, the lever action will reduce. Channel your efforts and you will reap rewards much easier. With higher intent, the force at the end of the see-saw is amplified further.

So if your aim is to make a million dollars, you will be more effective in that goal if you’ve got a good and worthy use for the money – even if this is purely financial and personal. You don’t have to give it away but just to amass wealth for no purpose is an empty challenge which will just end up with you worrying what to do next. The see-saw will just swing back the other way.

Naturally if everything you bring to your consciousness manifests, you could end up being a busy bee indeed. So it’s fine to flip back from time to time to a balanced state for the see-saw. What is healthier though is to achieve balance using reflection and assessment as opposed to fears and worry.