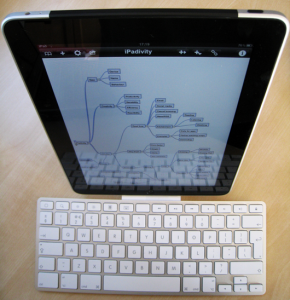 So I’ve had an iPad for the best part of a year now and loads of people have asked how I use it and what I’m using it for.

Well I’ve discovered using this new type of tablet (and watch this space for the clones) ushers in a whole modus operandi.

In short, it’s brilliant – especially for writers, designers, entrepreneurs, inventors and creatives. I would struggle to go back to using a laptop.

This new way of working merits the introduction of a new word – iPadivity.

1. the phenomenon of increased creativity and productivity when using an iPad – and activity while doing the same

2. the generation of new ideas using an iPad

Now I have to say everything I’ve been able to do I could do with a combination of iPhone or laptop. Some of it admittedly even with paper and pen. While the iPhone scores on portability, it lacks screen real estate and typing is slow (this whole blog incidentally was written at speed using the iPad on screen keyboard).

The laptop is just so much heavier and I have always felt a bit nerdy to get out on a commute and certainly in a coffee shop. It also takes too long to boot if you just want to do something quickly and acts as a barrier in a business meeting. The 3G enabled iPad delivers a useful synthesis of both devices which is better than both – plus I have to say it looks cool !!

This Mind Map tells the story of what I am using it for … of course generated on the iPad as were all the graphics in this blog.

The first iPadivity gain is really good use of “dead time” – those times in the day when you would have been waiting for something can now be used to process email, do a tweet or two and check out news or write a blog.

The second iPadivity benefit is being able to read, listen to or watch pretty much anything – either online, in iTunes or your own archive.

The third iPadivity capability, and to me the most important, is being able to write stuff. Here the lightness and specific functionality of the apps comes into its own. For example, before writing each chapter of my new book, I’ve taken a hint from artist Cat Bennett and I am drawing using Brushes an image that encapsulates the concepts I am about to write about.

I am working to a master Mind Map structure for the whole book but I’ve also started mapping each chapter before eventually writing it in Pages.

This has lead me down several new avenues I simply wouldn’t have explored.

Now could I do this on the laptop or desktop – absolutely – but not when the Muse takes me – and certainly not with as much ease and FUN !!

Add to all of this, the ability to browse on a whim for research and dip into the brilliant Wikipanion app, my iPadivity is probably up 400-500% of where it was less than a year ago.

I’ve also used the iPad in several client sessions. Again, its unobtrusiveness is the key. It’s like having a paper notebook but where you can email the notes instantly. In the sessions I did last week, this included a colour-coded Mind Map of actions arising and a wireframe for an iPad app I am designing, using iMockup.

This of course points to an amazing iPadivity – the ability to encapsulate your knowledge and wisdom in an iPad app which you can share with other and generate profitability from … watch this space !!

So if you’ve got an iPad or an iPad2 or another type of tablet device, or are getting one, I’d be interested in your thoughts ….