Creativity Blocks #003: Fear of the Unknown 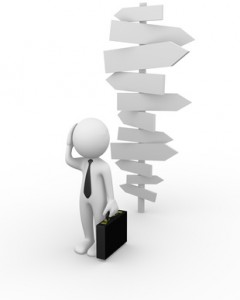 It’s natural for us to fear the unknown. Like all fears, this can start at an early age and remain with us for most of our lives.

The signs that this is happening in your life are:

To add more complexity and confusion, there are actually classes of unknown-ness. 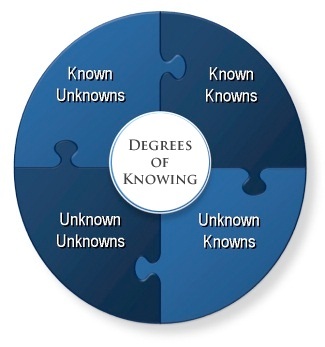 There’s obviously the stuff we know we know – the Known Knowns – at least that is until we find out whatever we thought we knew, we didn’t know that well after all.

There’s stuff we know we don’t know – the Known Unknowns – for example, for writers, who is going to publish our bestseller.

There’s a weird category of Unknown Knowns – these are things we know but didn’t know we knew. I love it when authors are actually quite surprised that people like reading their stuff. They were just not be quite aware of it.

Strategies for Getting to Know the Unknowns

1. Just accept we don’t have to know everything and getting to know things, make mistakes is part of the rich tapestry of life

2. Remind yourself that not trying is failure and giving it a go is success

3. Know that all you need to know is to know how to find out someone who does know

4. Learn how to use boolean searches on Google, Twitter and Wikipedia – and if you don’t know what a boolean search is or why they are useful just click here – take this as a tip from a person who knows

5. Use Cross Crawling and Mind Mapping to suppress the ‘critical’ left brain

7. Learn something new every day, no matter how small – for example, I subscribe to the Words for the Day from Dictionary.com and Visual Thesaurus so each day I improve my vocabulary … details on this blog

Incidentally, I find out daily that words that I thought I knew the meaning of – I really didn’t.

The Known Knowns weren’t quite what I thought they were !!!

The second major block to our creativity is the avoidance of failure. If you don’t actually do anything then you can’t possibly fail.

Somewhat ironically, we can be really creative on how we go about this. As for the other types of fears, in nearly all cases, other behaviour masks what is actually occurring.

Typical signs that this fear is in operation include being a ’busy fool’ and finding you are always serving other first before generating our own output.

Low self-esteem and pessimistic tendencies can also come to play. You may also find you give up at the first hurdle and any sign of adversity. You become an expert at creative procrastination.

These are all the tell-tale signs you are avoiding failure.

The route out of this downwards spiral is one of the most satisfying things we can do – we must learn to enjoy being self-indulgent and to put ourselves first. When you do this, you will both earn the respect of the people who you have been serving and show them ways they can do this for themselves whilst also reducing their reliance on you.

These are seven steps to take:
1. Diarise appointments with your Creative Self for your projects
2. Guard them with a passion
3. Share these dates with those that might thwart you by crossing your boundaries
4. Before each Creative session, go for a walk or meditate
5. During the session, switch off all distractions – phones, social media …
6. When you finish each session give yourself a treat and pat on the back … I have a digestive biscuit and cup of tea and sometimes I tweet to the world to declare another milestone has been reached
7. Then, and only then, get back to working with and helping others … you will find they haven’t been waiting for you and were getting on with other ‘stuff’

When you are successful in this practice, you realise that the real failure was not to even try in the first place.

You are now ready to take on the next fear, that of the Fear of the Unknown …

Where Do Ideas Actually Come From? 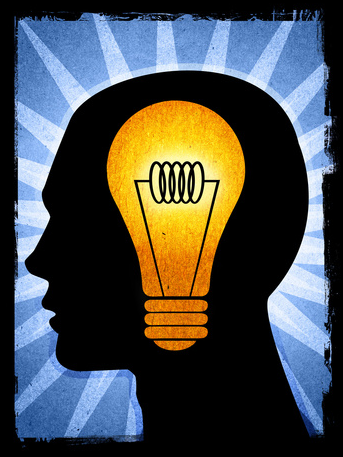 Incredible advances in understanding how our brains work have been made by neuroscientists, yet the place where our consciousness is generated and our mind resides proves elusive. It’s a good guess is that it’s only proving tricky to find because people are looking in totally the wrong place.

So when it comes to finding the source of something even more ethereal such as an idea, where do you even start looking? Even an expensive MRI scanner won’t help you here as it measures the brain state after a thought has occurred. Apart from anything else, you might not have an MRI scanner handy when that idea comes along as they tend to be random in nature.

Bring in the Thought Detectives
To find the source of ideas, we have become sleuths. The first clues to pick up on can be found in our language.
It is no accident that we say things like, “Off the top of my head” and “At the back of my mind”. When something is on “the tip of my tongue”, it well be exactly where it is at that moment in time.

If you observe people when they talk, the position of their hands gives much away too. Sometimes people reach above their heads as if they are pulling an idea out of the ether. They will pat the centre of their chest if they feel passionate about something.

It turns out that thoughts exhibit properties similar, but different, to electromagnetic waves. The quantum physicists, neuroscientists and the mystics (and crackpots) are all converging on the same type of somewhat preposterous conclusion. It looks like our three space and one time dimensions sit on top of a number of other dimensions that, accordingly, sit outside space and time. Furthermore, it is in these ethereal realms that thoughts propagate from the present, past and future.

So it seems that the latest theories in cosmology are somewhat converging with those on consciousness. These theories could explain things like your dog knowing you are coming home or that you know the phone is about to ring and who is going to be on the other end of it. Da Vinci may well have had the prescience to invent the helicopter and parachute by using a similar mechanism.

Water, Water Everywhere
A similar mystery exists around where ideas and thoughts go once we had them. The search for the location of our memory in our brains has proved fruitless.

Some further illumination into this conundrum can be had from the phrase, “I can feel it in my water”. Many people I spoke to when researching my book on light bulb moments testified that they got their ideas when in the shower or when out walking near a river or waterfall.

It is also reported that people who have had transplants of organs like the heart, lung and kidney exhibit personality changes and can even pick up memories from the donor.
It appears that the water in our cells is not just to stop us drying out. The Japanese author Masaru Emoto has done many experiments with water that show its state changes with the mood and emotions of people around it.

Nothing New Under the Sun
For some readers, some of this might sound bonkers and for others, it may nothing new you may have heard bits or all of it elsewhere. Well it appears that much of what we are re-discovering was known and accepted by the ancient Greeks and civilizations that predated them by thousands of years.

There may be a benefit to those who suspend their belief and accept that some of this might be true, even if it’s not been quite ratified and embraced by the left-brained scientific community. If you accept the notion that thoughts might come from outside our brains from a collective thought pool, we must then ask the question of why we just picked up on a specific thought at a specific time.

After all, if this is all true, there’s a near infinity of thoughts bouncing around in the cracks between our neurons.
If these specific ethereal whispers are filtering through to your conscious awareness, perhaps it’s important that you pay attention to them. What’s more, as they only occur in the space between your thoughts and if you want more of them, it may pay great dividends to attend that meditation or yoga class. 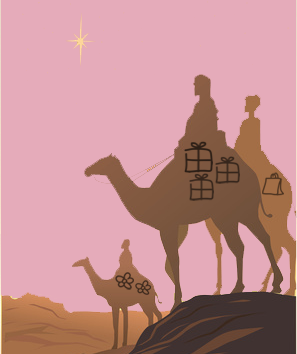 So when we have Three Wise Men, why might there be Five Wise Women?

Well men aren’t all dumb. It’s mostly, but by no means all, men that have flown other men to the Moon and split the atom asunder … but I reckon it’s long overdue that we started listening to the wisdom of women so I felt it intuitively right to tip the balance a little.

I consider myself lucky to have had the opportunity to chat to so many wise people over the last few years. If I look back though, the number of wise women I have spoken too far outweigh the number of wise men. So I reckon it’s high time that we take notice and listen to what they have to say. Men have had a crack at running the planet and look what sort of mess it’s got us into after all.

Have a listen to the chats below and have a listen to the interviews with Three Wise Men and make your own judgement on the shape and colour of wisdom that currently abounds us. In my view, neither is wrong, right or better but in both we should celebrate such wonderful different-ness and insight-fullness …

Kuumba Nia on the Circle of One

June Maffin on the Art of Soulistry

Sharon Eden on why to take a whack around the head

and last and by no means least, Violeta and Jutka Zuggo with Entrancing Tales 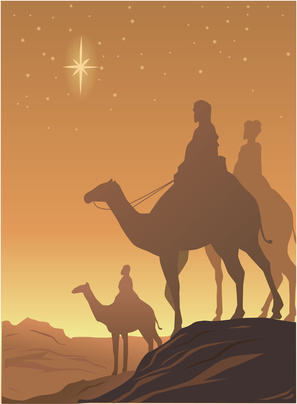 It is only fitting at this time of year to revisit and revamp myths of old so I thought it would be appropriate to share some messages of wisdom from Three Wise Men.

Some thousands of years ago, the Three Wise Men brought gifts from the East. In these globally connected times, messages can come from all the Four Winds.

Listen and watch these insight-full messages from Gary Plunkett, Wisdom Keeper, from Phil Birch, Professor-in-Waiting of Ethiconomics and from Robert Forman, ‘Professer’ of Enlightenment.