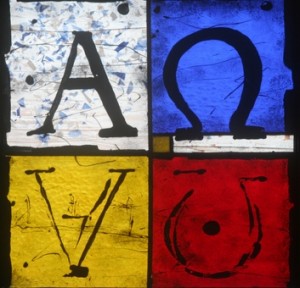 The English language, as rich as it is, is somewhat lacking in one major respect. I propose that it is missing something to give it some real zest.

The Greek language has 24 letters and starts with alpha and ends with omega. It also conveys the notion that the alpha and omega are implicitly linked and that, along with all the letters intervening, they form a wheel or circle.

This cyclical nature can also be seen in the Major Arcana of the Tarot. The cards 1 to 21 are linked by the zero card of the Fool and come back on themselves thus completing the Wheel of Life. Even Rotary Clubs were seeded by this notion although many of the members would be horrified if they knew. Just write the letters of the Tarot in a circle to see how the word itself too has embedded rotation in it.

Each of the Tarot cards has correspondences with the 22 letters of the Hebrew alphabet, starting with Aleph and ending with Tav. It is no surprise then that the Hebrew language has a cyclical nature too.

Even in packs of playing cards, the Ace can be high or low, connecting as it does the King and Two together. The Earth is round(ish), we orbit the Sun in an ellipse, galaxies are spiral and revolve around a central super-massive black hole. Circles and cycles are everywhere in nature.

So why is our English alphabet so boringly linear? When you get to the end of a dictionary or telephone directory, there is nothing to encourage you to go around again. Even A to Z maps are mere indexes and lists of street names with no rhyme, reason or interconnectivity.

When pointed out, this is an obvious notion. What’s to be done about it? Should we even care?

The reason why we have an alphabet with 26 letters that came from languages with 24 and 22 letters respectively is the stuff of a PhD thesis. I will leave the research into its evolution to other more worthy and knowledgeable scholars. I suspect though that the problem was seeded by the rise of a left-brained dominant society where ‘man’ kind was bent on mastering the elements and taking control over nature – not working with it.

By way of example, when Julius and Augustus Caesar were in power, they wanted months named after them. As a result, September to December were rudely pushed out of the way and made to be the ninth to twelfth months respectively. Any student of even rudimentary French will know their names are derived from the numbers seven to ten. Julius got July named after him and Augustus, August. Some days were even robbed from February to make them months of equal length. Such is the power of ego over the natural course of things.

In the same way, the elongation of our alphabet has caused us to loose the connective-ness of things. Even the name alphabet related to A followed by B – alpha by beta.

So let’s zest it all up a bit and throw the proverbial cat amongst the pigeons. I don’t propose we go backwards and ditch letters in order to get back to earlier rose-tinted times. Onwards and upwards is the clarion call.

What’s needed is a 27th connecting letter between A and Z and a new name for the sequence of our letters.

I will propose something for the latter and send out a message to the Universe (well the readers of this article) to provide suggestions for the former by way of Comments below.

By giving our language another letter, we extend it and augment the Universal Thought Pool.

And now, let’s sort out our alphabet and give it a new name and some added zest. Like all these things, the answer is trivial when you think about it and staring us in the face. Let’s call it the AlphaZed !!

What goes around around comes around.