The Next Big Thing

The Next Big Thing is a meme initiated by other authors which encourages typically self-effacing writers, like me, to BIG UP their work and share why we wrote it.

If you are an author and want to join in, all you have to do is write a blog with this title answering the questions that I have below. Then tag other authors, like me, who are joining in with the programme. 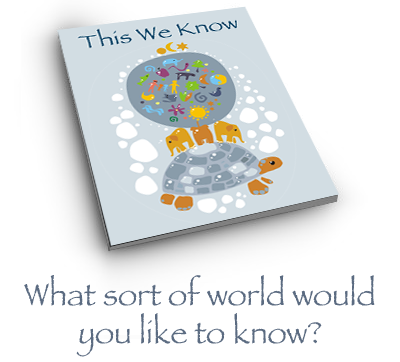 1) What is the working title of your current/next book?
My current book is entitled This We Know. My next book is completes a trilogy taking the esoteric and making it exoteric. The working title is Leaving Cubeland.

2) Where did the idea come from?
The idea for the current book came from watching my better half snoozing on the sofa and wondering how many other people on the planet were asleep right at that time. This then led me to ponder how many people who were actually awake were in some kind of waking sleep.

3) What genre does your book fall under?
Philosophy and futurology.

4) What actors would you choose to play the part of your characters in a movie rendition?
It’s non-fiction (apart from the Postscript 2112), so I would like the documentary version of this book to be narrated by the Lord of the QI Elves himself, the supremely knowledgeable Stephen Fry. It would be an exploration of our amazing knowledge and our amazing lack of knowledge in some fundamental areas. It would also ask people from all walks of life what sort of world they would like to live in.

5) What is the one-sentence synopsis of your book?
There is an infinity of things that we don’t know compared to what we think we know.

6) Will your book be self-published or represented by an agency?
I started writing the book on the 3rd September 2012 and had the printed books in my hands on the 21st September. It was available worldwide for ereaders on the 22nd September. Self publishing was the only option. Note I prefer the term indie publishing though. This is one of the beneficial byproducts of being able to Bend Time.

7) How long did it take you to write the first draft?
Less than two weeks. Note I teach the different-ability to tap into our future self to get the words we have yet to write. For this reason, the first draft was also pretty much the final draft.

8) What other books would you compare this story to within your genre?
Unashamedly I’d compare it with some of Seth Godin’s disruptive thinking and one reviewer compared the writing style to that of Richard Bach.

9) Who or what inspired you to write this book?
A medium sent me a poem that had been given to her specifically for me. It’s called the Journey of the Secret Man. Two days after I received it, the book just flooded in.

10) What else about the book might pique the reader’s interest?
This short video was specifically put together to pique interest.

Other Next Big Things