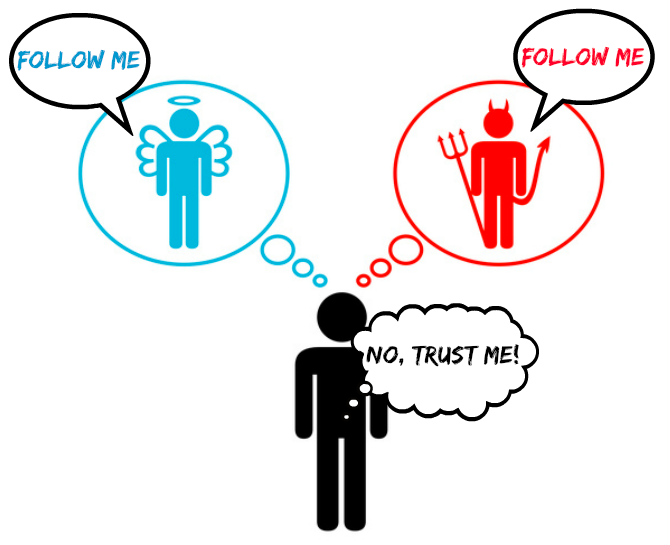 Do you ever get the feeling you don’t know if you are coming or going some days?

Perhaps you feel you are continually at a fork in the road, not knowing whether to turn left or right. You may simply be suffering from ‘twominditis’.

The Devil on Your Shoulder

Now it’s a bit of an urban myth that our left brain is logical and our right brain is creative. It’s more accurate to envisage that the left brain (in most people) handles detail and learned responses and the right brain is ‘whole-istic’ and processes new information. Even this model is a gross over-simplification.

Perhaps because of this urban myth that, when we refer to being in two minds about something, we might think that there is some inner turmoil and squabble between our brain hemispheres. This myth may well have been perpetuated by Tom and Jerry cartoons where a devil perched on a shoulder whispers in one ear while an angel advises caution in the other ear. Incidentally, the devil is often drawn on the left, or sinister, side of the cat urging him to barbecue the mouse!

These days neuroscientists know that the human gut contains more neurons than a cat’s brain. It is also in constant communication with our head. Much of this mostly silent dialogue is concerned with requesting food and liquids. Often these come in the form of cravings.

If you have ever said, “I wished I had trusted my gut” on this or that, you will have experienced something mystics have known for ages. Our gut, or enteric, mind is the seat of intuition, sometimes in esoteric circles expressed as “inner-tuition”. Neuroscientists have also discovered something bizarre about the neurons in our gut. They seem to react to events in the external world several seconds before they occur.

It turns out that our gut is not only invariably better at making decisions than our head but it makes these decisions before we are consciously aware we need to make them.

The reason matters sometimes go awry is that our gut is a primitive mind centre when it comes to language. It only speaks with a “go” or “stop” or “yes” or “no”. It is also very quiet and is often swamped by the loud and incessant inner chatter of our so-called “monkey mind”.

Something else that mystics ’know’, and that some brighter neuroscientists are just starting two twig, is that our brain is both a generator and receiver of what are called ’thought forms’. If you think about someone just before they call you on the phone, you will have experienced the reception someone else’s generated thought forms. Again, loud inner chatter can swap out incoming whispers.

Mystics also ’know’ that it is our thought forms that generate our reality, both individually and collectively.

Such thought forms are not just restricted to our heads. Our gut and heart also generate and receive. Two hearts can literally entwine or fall out of love with each other. Our guts also act as our protector and are where ’fearful’ thoughts lurk in our neurology.

While our head might hold the desire for a certain outcome, our gut mind can harbour the fear that it might not materialise. When such conflicting thought forms leak out, they can interfere with each other and we get stuck at that fork in the road. This is how being in two minds stops us in our tracks – not going left or right or forwards or backwards.

The solution to this quandary lies in invoking the considerable, and often latent, power of our heart mind. When we enter the meditative state, we can quell both the head and gut minds and allow our heart to take over. The thought form that we hold in our heart should be solely our intention! 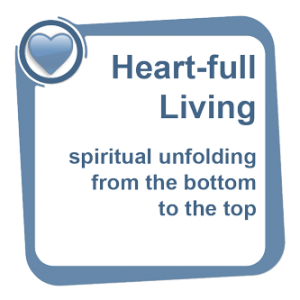 My Heart-full Living course is based on the wisdom of ages.

It shows you how to re-engage with all your mind centres and to allow each centre to operate to it’s natural strength. At the end of the course, there is a bonus visualisation called “The Two Mind Transmutation” which shows a powerful alchemical technique to use the heart to convey your intention.

Learn how to live heartfully today …