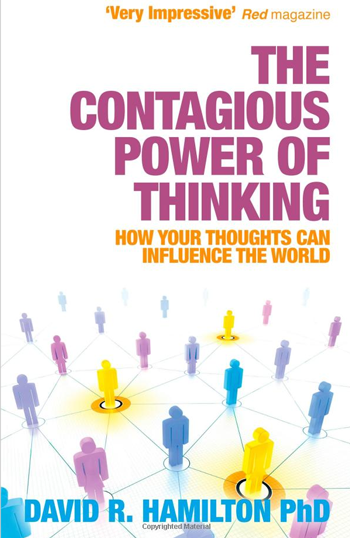 I had the great pleasure last week of hearing Dr David Hamilton talking about the remarkable properties of mirror neurons in the brain. They are the mechanism behind how we empathise, emulate, copy and learn.

This resulted in many light bulb moments firing in this particular head of mine.

I’ve been doing talks and workshops on creativity and innovation for some years now and I’d noticed that when I get into the state where I can receive light bulb moments, people in the room would follow shortly after.

To find out how this all works, I recommend you buy David’s book called The Contagious Power of Thinking or, better still, attend one of his talks and then buy the book – as he explains it all much better than I ever could.

So at my talks naturally people will pick up on my body language, the words I say and the images should I use any slides or handouts. The mirror neurons are the mechanism whereby such empathy is achieved. There is something which is more subtle in operation too however.

Before I even get to the venue to do the talk, I set my intention that the attendees of the talk will get into the state of having light bulb moments. Furthermore, that this state will linger either for a few days after the talk or even permanently.

People report having not known why they came to a particular talk but that they felt strangely drawn to attend. They also can’t remember where they first heard about it.

Now I am not claiming any extrasensory powers. What everyone is experiencing is a natural state of affairs and happens all the time but, mostly, outside our conscious awareness.

What is interesting is how this concept can be applied in business – especially if the business is involved in new product development or any creative field such as publishing, marketing, design or any artistic endeavour.

Any mindset we adopt will spread unconsciously – including anger, fear and guilt – and any behaviour and culture set will also ripple throughout an organisation like gossiping and lunchtime drinking.

So if you want innovation to spread in your organisation, it needs to be seeded and then it will spread organically. For example, apocryphally a US president visiting NASA in the Apollo era asked a janitor what he did and the reply was, “I fly rockets to the Moon”. This type of team spirit amplifies, reflects and ripples from mirror neurons to mirror neurons in each team member working to a common goal.

Sowing the seeds for innovation

The first step is to initiate the culture change with a thought and attitude and it can start anywhere in the organisation but ideally with senior management. The end goal is for it to be adopted from the bottom up whilst also aiming to remove the whole idea of the top and bottom hierarchy, as one could not exist without the other and it is in essence more like a symbiosis.

Then practical steps should be taken to foster innovation throughout the business, such as:

2. A suggestions wall or whiteboard [best seeded with an associative Mind Map]

3. A more formal and facilitated intervention like a Walt Disney Three Rooms session or de Bono’s Six Thinking Hats. Even better again would be to use Appreciative Inquiry which additionally generates a positive thinking mind set. The idea of positive thinking also spreads like wildfire and is based on taking what works and making it even better rather than focusing on woes and trials and tribulations.

The Business of Light Bulb Moments