The Cascade of Creativity 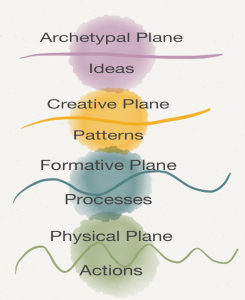 The difference between people who have success with their ideas and people who just have brilliant ideas is their ability and propensity for getting things done.

Some people are naturals at making things happen and others seem to struggle.

To give some help to the latter people and insight to the former, it is worth considering where ideas come from in the first place and our role in making them happen in the Physical Plane.

It is postulated by scientists these days that what we see in the material plane is the tip of a multi-dimensional iceberg. This has been ‘known’ for thousands of years by metaphysicians. The Minor Arcana of the Tarot is an ancient model for how this ‘iceberg’ is constructed and operates. My book, Planes of Being, explores and expands on this in more detail.

In short, we are multi-dimensional beings experiencing a three dimensional existence, playing out along a forward-arrow of time. This is a pervasive illusion which we can learn to ‘see’ through by entering the meditative state.

What’s more, we are all connected by the dimensions above us and each higher ‘odd’ dimension is imbued with intelligence and consciousness. These ‘intelligences’ are seen by some as ‘beings’ but we can also think of them as discarnate aspects of ‘Us’ – as everything is connected.

When we have an idea, or light bulb, aha or eureka moment, what we have done is to tap into the 9th dimension also known as the Archetypal Plane. This is the Plane of Ideas.

The Archetypal Plane is connected via the 8th dimension, or Plane of Thought, to the 7th dimension known as the Creative Plane. Here the ideas can form into potentialities of what we can do with the idea.

The Creative Plane is connected via the 6th dimension, or Plane of Light, to the 5th dimension known as the Formative Plane. Here the creations form into a plan which is mapped out across time.

The Formative Plane is connected via the 4th dimension, of Plane of Time, to the Physical Plane or 3rd dimension. Here’s where the idea can come into what we refer to as existence.

When we experience a light bulb moment, what happens is we get information from all the planes at the same time. This can cause us to rush into the delivery of an idea before some elements are in place. For some, the idea just consumes them and nothing gets done.

Working with the Moon

If you want a handy and practical way to work methodically through the cascade of creativity, you can work with the Moon Phases. This video explains how …

The MAGIC of AHA 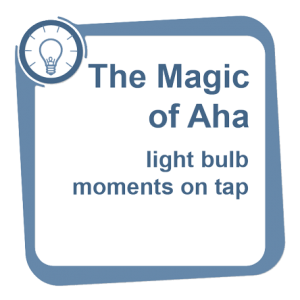 If you want to know more about how to have ideas on demand and how to make the good ones actually happen, then my self-study course, The MAGIC of AHA, shows you how.

What’s more, as the course helps you enhance your Third Eye sight, £20 of your investment will be donated to my EyeLove campaign. This will fund the removal of a cataract for someone in the developing world.

Learn about the MAGIC of AHA here …

And read this blog to find out more …

Cataracts of the Third Eye